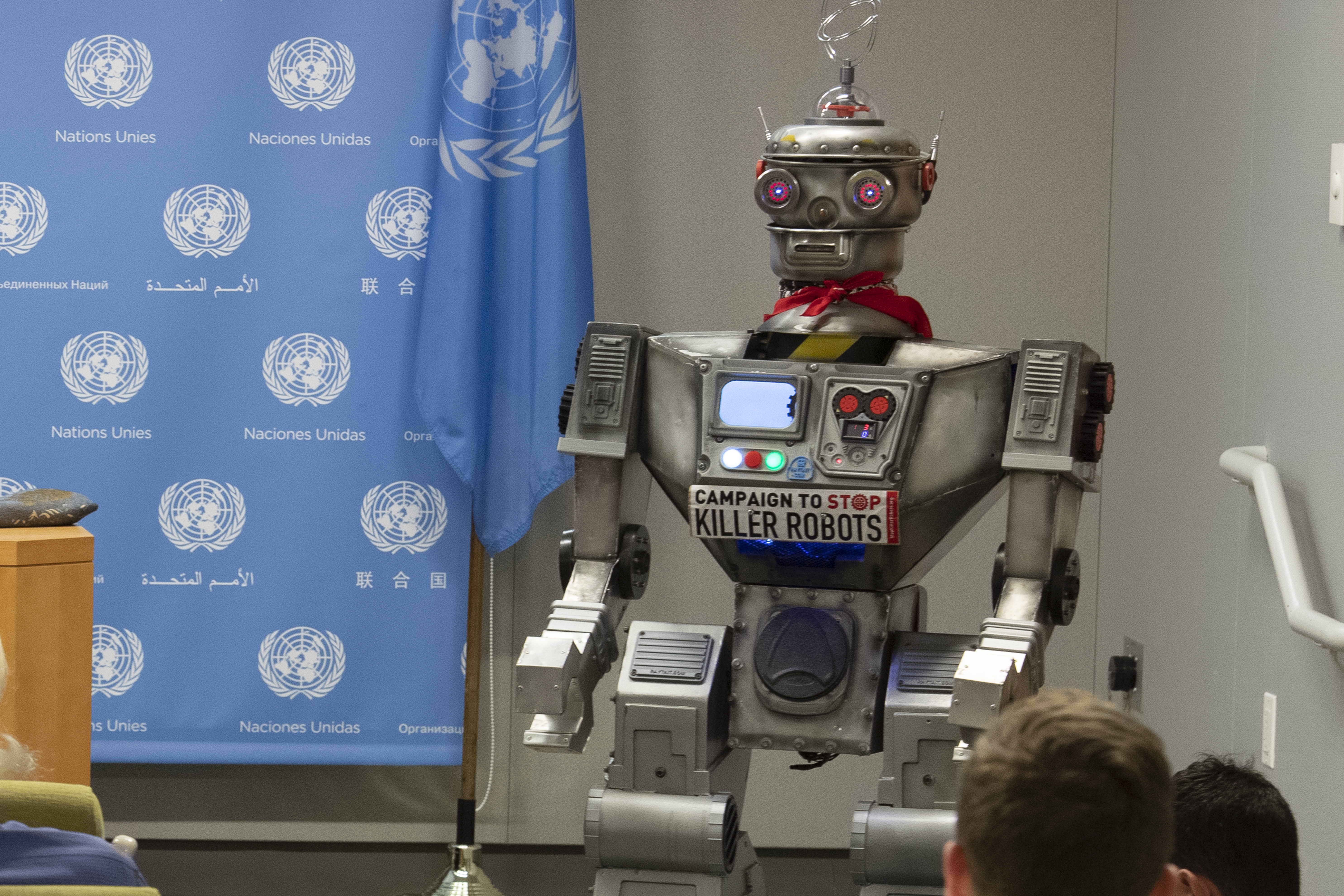 Together First Content
Download submission
Credited submissions (4)
Guy Blaise Dongmo Feugap
Peace and Security: Question marks over Africa's future
Mary Wareham
A Moral and Legal Imperative to Ban Killer Robots
Isabelle Jones
Killer robots are not inevitable
Thompson Chengeta
Curb your banphobia: It’s critical to ban killer robots now!
Global catastrophic risk mitigated
Unknown risks
The threat from new and emerging technology
Weapons of Mass Destruction
Risk multiplier managed
Institutions that lack inclusivity or accountability
Conflict or political violence
Implementation timeframe
Short term
From mustard gas to cluster munitions our international system has a long history of prohibiting forms of warfare that society deems too barbaric and dangerous. As the 1995 Protocol on Blinding Laser Weapons shows, it is not necessary to wait until new dangerous technologies are in use before banning them.
What if political will does not exist yet


An incredibly effective and powerful coalition of civil society organisations have come together to campaign for a legally binding treaty banning killer robots. Furthermore, 30 states have explicitly called for such a treaty, and there is general agreement among more than 80 countries on the need to retain meaningful human control over the use of force. The UN Secretary-General has made campaigning for a ban on killer robots a defining element of his term of office.

However, a small group of states are consistently thwarting progress towards a treaty under the auspices of the Convention on Conventional Weapons (CCW). As a consequence it is likely that, as with landmines and cluster munitions, the prohibition treaty may need to be developed by supportive member states meeting as part of a separate process.


The Secretary-General is determined to do what he can to establish a new treaty banning killer robots. He has the opportunity to push for it through the UN75 process, through the UN Panel on Digital Cooperation, and through any follow up mechanism either process establishes. With the support of a powerful coalition of states and civil society organisations he will not fail.

Mitigating the threat from new and emerging technology


Lethal Autonomous Weapons Systems, or “killer robots” are an emerging area of serious risk. By taking meaningful human control out of the decision to take away life we create all sorts of dangerous and undesirable effects. At the most extreme end there is a risk of such technology running out of control and causing major unintended loss of life. And even if this is avoided, the technology poses multiple grave threats to our mechanisms of accountability and our ability to prevent war crimes, as well as enabling dangerous and discriminatory practices of war. Given the pace of military technology it is imperative that the international community negotiate a treaty to ban them before it’s too late.


In addition to the proposal's own merit, it could demonstrate the efficacy of the model of treaty based prohibitions, for the better management of global risks through treaty processes and the establishment of international standards.


A small group of states are consistently thwarting progress towards a treaty under the auspices of the Convention on Conventional Weapons (CCW). If they are allowed to thwart the clearly expressed views of the majority of member states, civil society and the Secretary-General it will be indicative of a serious issue with the inclusivity and accountability of our weapons governance mechanisms.


Further information is contained in the linked submissions